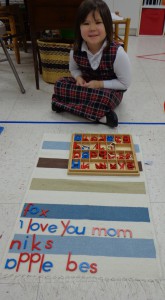 Dr. Montessori noted that many children were frustrated by a lack of proper stimulation and inadequate opportunities to achieve. She observed that children became happier and more self-controlled after a period of time in the orderly environment she had created. Here they were introduced to challenging tasks which not only absorbed their energies, but resulted in a sense of achievement. These observations led Montessori to develop the planned system of education that bears her name.
Many Montessori schools were established during her lifetime, some of which are sponsored by various religious organizations. There are Montessori schools in over fifty countries, including the United States, where thousands of private Montessori schools have been established nationwide. In addition, Montessori classes have been set up in more than one hundred and fifty public school systems in twenty-nine states. Skinner Elementary Montessori is a private Montessori school in Clark County, Washington. It is a nonsectarian (i.e., not affiliated with a religious organization) and a non-profit charitable 501(c)(3) organization.

The Montessori Advantage
Through her observations, Dr. Montessori found that children between the ages of 0 and 6 years absorbed everything around them like a sponge, learning almost everything without effort. She called this phenomenon The Absorbent Mind. She theorized that children’s experiences could be enriched in a classroom where they could handle materials which would demonstrate basic educational information. Dr. Montessori observed another childhood trait, termed the “Sensitive Periods,” which are periods of time during which it is easier for a child to learn a specific skill or concept than at any other period in life. This observation has been confirmed by modern scientific research. 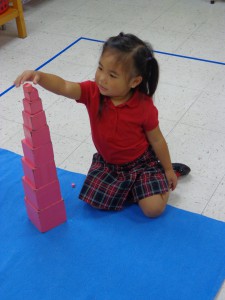 The Montessori Classroom takes advantage of these traits by using specialized Montessori materials and unique ways of showing children how to construct themselves. The Montessori Classroom is carefully designed to take advantage of the Absorbent Mind and the Sensitive Periods. Each child selects individual activities which interest and engage him. The activities a two to four year old chooses will help to develop concentration, coordination, self-discipline and good working habits, which are needed for the more advanced activities of the four- to six-year-old, and so forth. The classroom is designed to ensure that each child is challenged with fun, aesthetically pleasing, and enriched activities. Part of the Montessori teacher’s job is to see that your child is happy, nurtured, and that the environment is meeting your child’s needs. This will foster self-confidence and independence, which will serve your child well in the years to come.
The Montessori classroom environment is one of non-competition, and because it is a “family grouping” of children ages 2 1/2 – 5 years old in the Primary Program, and K – 6th grades in the Elementary Program, social growth abounds as the children interact with each other on a daily basis. Purposeful work and play is emphasized in the Montessori method. As a result, preschool students at Skinner learn to control and refine physical actions, acquire basic human skills, develop sensory discrimination and an understanding of concepts, including academic subjects such as reading, mathematics, and writing that surpass what is normally expected of children at this age.

Responsibility for Others
The idea of caring for one another is integral to the Montessori approach. The older students serve as role models for the younger children and are taught to be responsible for them physically, emotionally and academically. 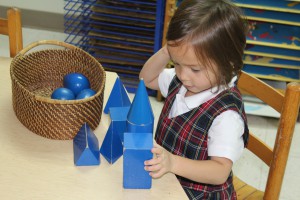 Sensorial Materials
The sensorial materials are designed to enhance the child’s sensory abilities. Each piece of equipment is geared to help develop a particular sense such as the thermic tables (tactile), sound boxes (hearing), and broad stair (discrimination of size in three dimensions).